The North East of Scotland has a long and often exciting history, and you can visit sites which go back long before even the Romans arrived here – although they only stayed briefly!  The Picts have left their mark (indeed, within a stone’s throw of Burghead Cottage), while colourful characters such as the Wolf of Badenoch pepper the medieval period. Click here for a very good article about the history of Moray.

The white sands of East Beach beyond the breakwater

andend Village was established by the early 1600s and is one of the earliest fishing communities on the Aberdeenshire Coast although many of the older fisher cottages and the harbour you see today, were built in the 1800’s. You will find a unique cluster of charming fishing cottages around the characteristic harbour. 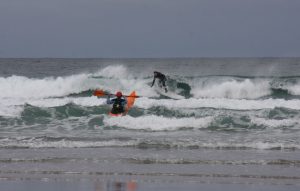 Kayaking and surfing are both popular activities at Sandend

Sandend is a magnet for surfers who travel from all over the country to ride the waves that crash onto the long, sandy beach which, unsurprisingly, gave the village its name! The waves here are regarded as being among the best waves in the country – surfers often say it’s like Cornwall without the crowds… And a visit to the local Glenglassaugh Distillery is sure to provide some warmth after a dip in the sea!

Visitors to the beach can also see the remains of World War II anti-tank positions and pill box defences! 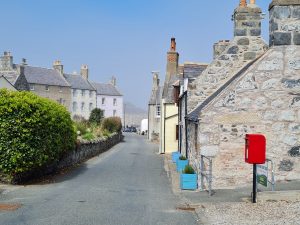 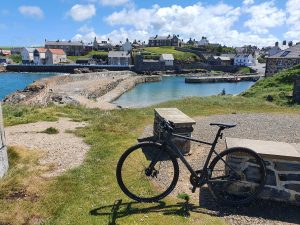 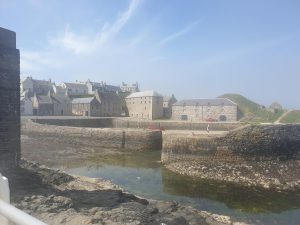 Portsoy was created a burgh of barony in 1550. It was given by Mary, Queen of Scots to Sir Walter Ogilvie of Boyne.

The first harbour was built at around the same time but was replaced in 1692 by Sir Patrick Ogilvie, the 8th Laird of Boyne with the one you see now,  built entirely of stone. Large stones were set vertically as it was said this made them less likely to be washed away by the sea. Portsoy’s harbour was considered to be the safest in the North East, which meant that it had a thriving trade with both England and the Continent.

The Lairds of Boyne built the Palace of Boyne in the 1570s, which was still being used as a grand house in the mid 1700s when the Ogilvies’ support for the Jacobite cause led to their being stripped of their lands. Its ruins can now be seen two miles (3.5 kilometers) to the east of Portsoy.

The new harbour was built between 1825-28 to meet the demands of the herring boom and the volume of trade going through Portsoy. Throughout the nineteenth century a herring boom brought further prosperity to Portsoy, with a herring fleet totalling 57 boats at its peak, though usually averaging 40-50 boats in harbour employing 108 resident fishermen and boys.

The harbour was washed away in an extremely violent storm in January 1839 and was only rebuilt in 1884 to hold 12 vessels of 100 tons, though most ships visiting the harbour were much smaller. The main imports were coal and bones from the Baltic, and the chief exports grain, herring, and potatoes.

Towards the end of the nineteenth century the Portsoy fishing fleet moved to the larger harbours of Macduff and Buckie and today Portsoy’s harbours are primarily used by pleasure craft and creel boats catching lobster and crab. Portsoy is home to the popular Scottish Traditional Boat Festival. The Salmon Bothy, a local museum, venue and heritage centre is a good place to start if you are wanting to trace your ancestors in the North East of Scotland. Further advice and resources are available at northeastscotlandroots.com 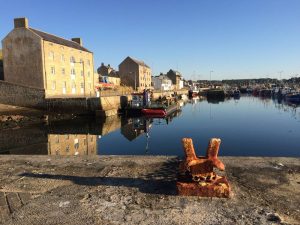