A long time ago, pre covid, in 2018 in fact, we bought the old police station in Portsoy. The idea was to convert it into a modern, well insulated, comfortable holiday property. It had lain empty for many years. It was in a poor state of repair. And Colin (in the midst of a mid life crisis?) decided he wanted a new project! 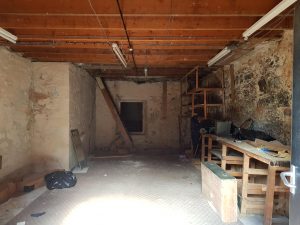 Unfortunately for the police station, just after this, Driftwood Cottage, a beautiful seaside holiday cottage that we had long coveted, came on to the market (well it didn’t, but it was for sale!) The priority switched to get this ready as quickly as possible, which we did welcoming our first guests in March 2019. And then it was summer and life (and rowing!) took priority and the police station remained, empty and unloved for a while longer!

At the end of 2019, with the bit between his teeth again, Colin started to strip everything out of the building, until it was back to the bare walls: 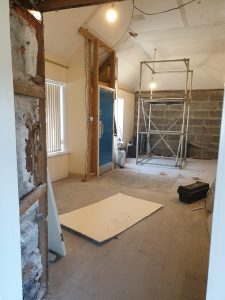 Upstairs, with all the partitions removed 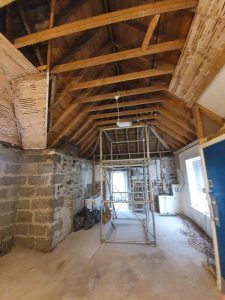 Almost back to the joists, we had a huge source of kindling for the winter… 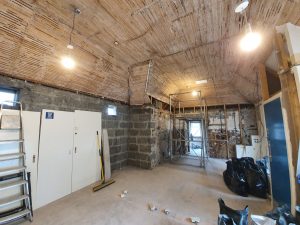 With the false, suspended ceilings removed the vaulted roof gave an idea of the space we might harness

Once again, unfortunately, this all revealed a multitude of sins: The ‘modern’ annexe was barely attached to the main building and you could see a vertical strip of light between the two. A poorly placed bracket or ten had rusted, and expanded, between the breeze blocks driving them apart, so there was a strip of light horizontally too! Was our investment about to come crashing down around us? This was beyond Colin’s area of expertise and it was time to call in ‘the heavies’ in the form of Ricky Ross! 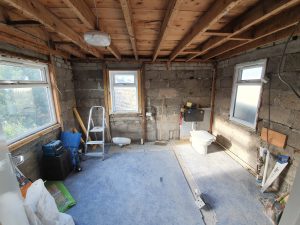 The ‘modern’ annex housed the old kitchen and toilets. See daylight shining through, one block down on the right hand side! 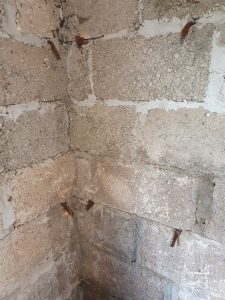 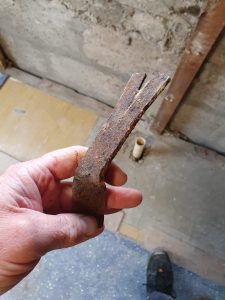 One of the offending rusty brackets

He was due to start one Monday in March 2020. Again, unfortunately, the week before all activities were halted as the first covid lockdown was started.

About the Author: Wendy Clements 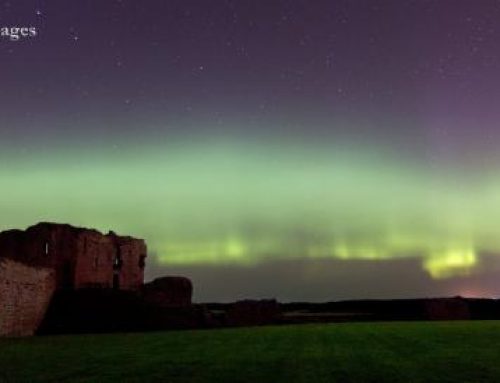 Please help us to get our plastic recycling right in Moray!

Please help us to get our plastic recycling right in Moray!